I.8 Modeling a Reconstruction of Habermas’ Universal Pragmatics (1977,1985)

The purpose of this paper is to demonstrate how with the help of a mathematical model the set of concepts which are constitutive for Habermas’ conception of UP can be systematically generated, and how its coherence and consistency can be reconstructed.
(Note: in the published text of 1985 I have replaced  everywhere the term ‘competence’ by the term ‘capacity’ as the more appropriate term. I made there also a couple of alterations aimed at improving and clarifying that published text .)

Habermas has introduced the concept ‘Universal Pragmatics’ (UP) in his (1976a and b) and in his (1980), (1981a and b). In these writings it is the name he uses for a general theory of social interaction , which is the reconstructive-philosophical part of his theory of society. Its aim is to reconstruct in an analytical manner, that is, regardless of historical time and space, the overall structure of a social interaction situation. According to Habermas’ reconstruction all social actions and events have, in all contexts and on all levels of analysis, a common multidimensional, intersubjective structure. In this paper I can not give a detailed analysis of his reconstruction. I have to refer to my dissertation (1982). A short outline of my reconstruction is given in my (v.Doorne , Ruys 1984) and (v.Doorne 1986).

To give at least an impression of Habermas’ differentiated (speechact theoretic) pragmatic approach I quote a passage from his (1981, 159) that, in my opinion, is quite significant:

The same network can be analysed intentione obliqua, from the perspective of the lifeworld, or the background of shared assumptions and procedures, in which any particular piece of communication is inconspicuously embedded from the very beginning. From this viewpoint language serves
– the function of cultural reproduction (or keeping traditions alive): (…)
– the function of social integration (or co-ordinating the plans of different actions in social interaction): (…)
– the function of socialization (or of the cultural interpretation of needs): (…).’

As a result of my reconstruction of Habermas’ UP I consider (partly amending his terminology and adding to it) the following set of concepts as indispensable: objectivity, subjectivity, normativity, intersubjectivity and sociality. I feel encouraged to defend this position by Habermas’ recent analysis (1996), in which he reconstructs the linguistic-pragmatic, conceptual infrastructure of social interaction.

These five concepts determine in their mutual interdependence the general characteristics of social relations. It is only with the help of a mathematical model and in a longstanding dialogue with Pieter Ruys, professor of mathematical economics, that I have been able to articulate in a precise way the complex interrelatedness of the five constitutive concepts as they are introduced in Habermas’ writings. The mathemathical model I use has been developed by Ruys, and he calls it the tripolar interaction model. Making use of this model in my interpretation of Habermas’ conception I have developed a Habermasian  tripolar model of social interaction. I claim that my interpretation is consistent with the characteristics of the (mathematical) tripolar interaction model as well as with the (philosophical, pragmatic) structure of Habermas’ conception of social interaction. Interpretation of the formal model in terms of what I call a basic model of social interaction results in a consistent, coherent, and fruitful set of analytical concepts that are appropriate to generate the five structuring concepts of Habermas’ UP. I introduce it under III.

The tripolar interaction model that I take as my point of departure, is a purely formal model, that is, void of empirical content. Its structure is determined by the interdependence of seven positions, represented by points, and seven relations, represented by lines (see figure 1). For the mathematical features of the operator that commands the interaction between points and between lines I refer to (vDoorne/Ruys 1986, section 3.1 and 3.2, 208-212). 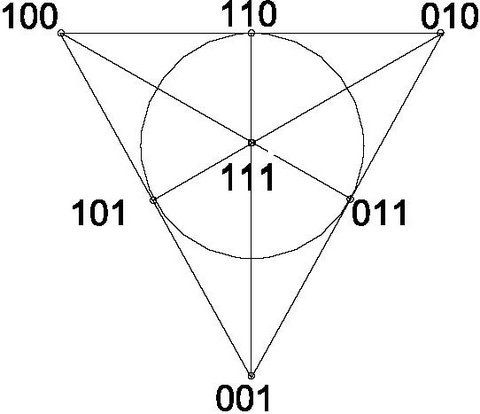 Figure 1 represents the structural nexus of positions and relations. Figure 2a (see below) represents my interpretation of the positions of figure 1 in terms of primitive concepts* referring to the constituent components of social interaction which are necessary and sufficient for generating the five structuring concepts of Habermas. These are defined by the (interpreted) relations of figure 1 represented in figure 2b (see below).

With the philosophical interpretation I give to the three separate capacities, I alter the formal equivalence of the three positions with one characteristic by conceptually defining two of them (100 and 010) as agent capacity. For these two positions this capacity is understood in the same sense, albeit that the capacity is unique in the two cases, understood as being irreducible to the other. This difference will be coded as + and -. From the perspective of a general theory of society I interpret the third position (001) as (capacity of )mediating resources; it equally represents a separate capacity, .

In this way, I have interpreted all the positions of the mathematical tripolar model in terms of well defined primitive concepts which , so I argue, are necessary and sufficient to develop the concepts for a general theory of society. The positions in figure 2a represent these primitive concepts (in shorthand), and instead of the algebraic codes assigned to the seven positions I use the first seven letters of the alphabet (lower case) to name them, as follows:(100) a=agent capacity +, (010) b=agent capacity -, (001) c= (capacity of) mediating resources , (101) d=(capacities of) embodiment + and -,  (011) e= (capacities of ) embodiment – and +, (110) f =(capacity of) common framing, (111) g=integrative capacity. 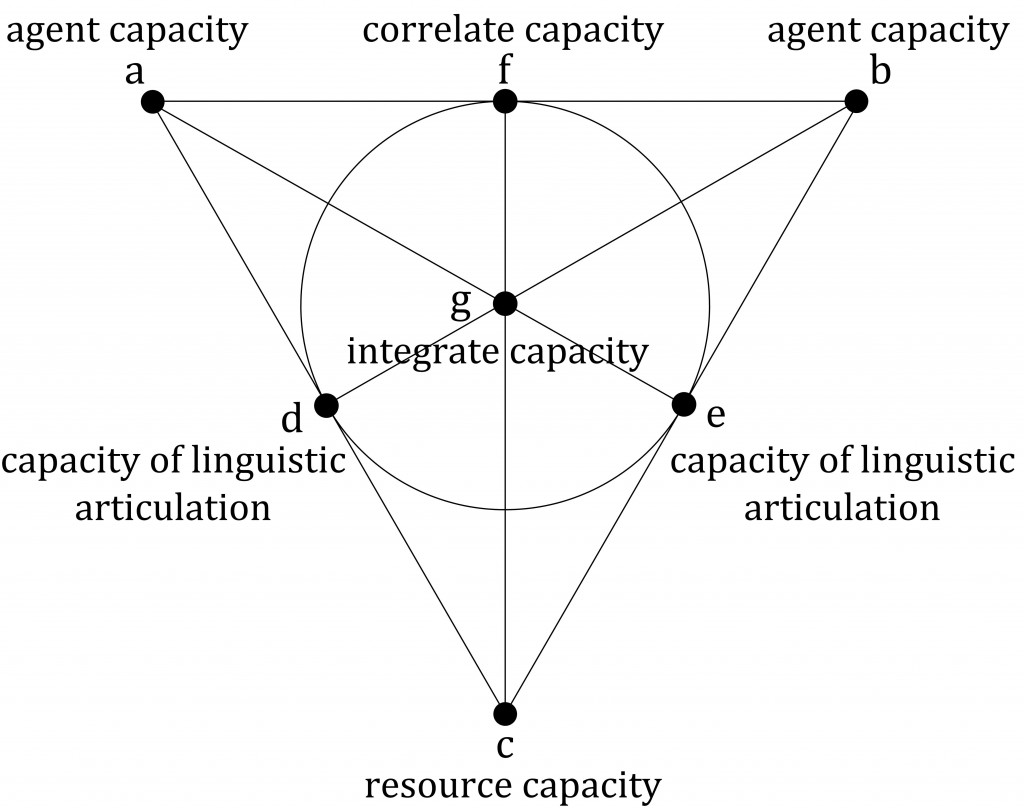 In Table 1 I summarize the foregoing:

. capacity of embodiment + (d as intermediate in the relation (a,d,c).

. capacity of embodiment – (d as intermediate in the relation (b,g,d). I will specify this capacity as object determination

. capacity of equivalent embodying capacity+ and object determination – (due to the capacity of common framing f as intermediate in the relation (d,f,e);

. capacity of embodiment – (d as intermediate in the relation (a,d,c).

. capacity of embodiment + (d as intermediate in the relation (b,g,d)),

. capacity of equivalent embodying capacity – and object determination + ( due to the capacity of common framing f as intermediate in the relation (d,f,e)

. capacity of common framing of agent capacities + and – (f as intermediate in the relation (a,f,b))

. capacity of common equivalent framing embodiment + and object determination – (f as intermediate in the relation (d,e,f))

. capacity of common framing in the use of mediating resources (f as intermediate in the relation (f,g,c));

. capacity of integration regarding commonly framed use of mediative resources (g as capacity in the relation (f,g,c)),

With the help of the analytically constructed primitive concepts of Table 2a and given the definition of their interrelatedness I am now able to generate systematically the concepts needed for a UP. The five structuring concepts generated are represented in figure 2b by the seven relations. Each of them is conceptualized in terms of the interactive nexus of three primitive concepts summarized in Table 1, such that each time the three concepts concerned belong to the same relation: the relation of respectively subjectivity +, subjectivity -, objectivity +, objectivity -, normativity, intersubjectivity and sociality (as shown in Table 2).

(a,f,b) : a relation of normativity

(f,g,c) : a relation of intersubjectivity

constituted by common framing of action competences (f), social interaction regarding the intersubjective objectivity of embodiment + and – (g), and mediative resources (c);

Habermas, J.(1981a), Interpretatieve sociale wetenschap versus radicale hermeneutiek, in Kennis en Methode 5:4-23 (quoted from the Manuscript of the English Version 5-6)